What do the Marines say about the Marine Corps University Foundation?

On behalf of my faculty and I, THANK YOU! Your support for our Academy’s Battle Study to the Gettysburg battlefield provided both a learning opportunity and a tremendous team-building experience. Faculty members from each of our three resident courses and the support staff formed teams of Marines who normally don’t work hand-in-hand to prepare briefs for each of our ten stops. The time spent researching and then rehearsing their briefs allowed them to better know their peers in other courses. One of our PFCs, who supports the Academy in its supply section, was happy to report she gained confidence in speaking in front of people through her preparation of the brief. We also took advantage of being away from home overnight to have a large dinner together at a local restaurant and the banter after just the first day’s stops was lively and good-natured. Seeing first-hand the ground on which the battle was fought and discussing the decisions made and the reasons for those decisions was a great education for our whole staff. As one Gunnery Sergeant put it, “It’s one thing to learn about these things in a classroom, but to actually be standing in the place that it happened brought an entirely new perspective.” Discussions of mission, priority of fires, commander’s intent and many other topics all eventually turned to how those same concepts are applied daily as we accomplish our mission of educating the force!

Brigadier General Draude was fond of saying whenever he briefed our students, “the Foundation bridges that gap of excellence between what is paid for and what is possible to truly make an educational impact.” I am proud to say the Marine Corps University Foundation did exactly that and then some. The trip educated our faculty and also raised the Esprit de Corps and camaraderie in a way that will surely pay dividends to students this faculty will educate in the future. Thanks again for your truly invaluable support!” 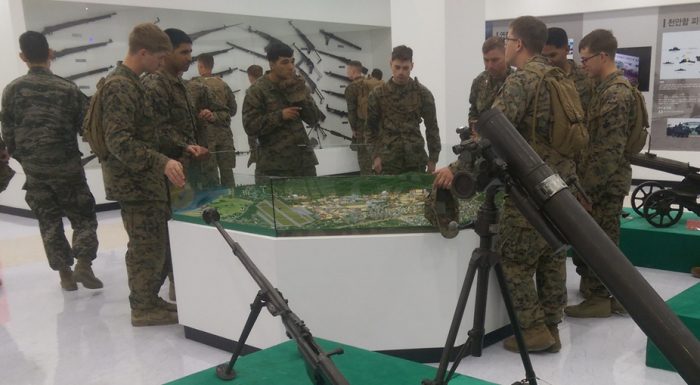 “While our company deployed to the Republic of Korea, we had the opportunity to take our Marines to the Nakdong River Battle Museum at Apsan Park. The Marines were able to get away from the installation for the day and set foot into areas contested during the Korean War in order to learn about how their MOSs played a role in two of the specific battles. Exposure to the park’s mountainous terrain was a tremendous experience for the Marines – peeking into what daunting slopes and unforgiving cliffs existed on our predecessors’ battlefield. The whole experience will remain one of the better personal memories I have of the deployment and I know the Marines enjoyed themselves and learned a lot. None of this would have been possible without the generosity of the Marine Corps University and I am very grateful their representatives gave us the opportunity to expose our Marines to such a remarkable battle study.”

“The Nakdong River Battle Museum was an excellent experience for the Marines on many different levels. The exposure to the battles from the Korean perspective was educational for all of us. Being able to accomplish all of this while also submerging our Marines in Korean culture was an opportunity that many of us won’t have again. We are all very grateful for the opportunity we had to expose our Marines to this valuable training.”

“The brief from the platoon commanders helped set the stage for us before we went into the museum. By far, what struck me the most was a fake tree inside of the museum that had dog tags from many of the fallen ROK Marines, this really put everything into perspective for me how many people’s lives were taken throughout the battle itself.”

Learn more about how MCUF can support your Unit’s PME HERE!