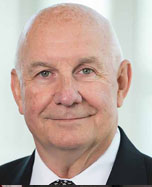 He is a former resident of Jackson, Michigan and a 1975 graduate of Central Michigan University (BSBA) and The Platoon Leaders Course. He graduated from The Basic School in 1976 and subsequently was designated a Naval Aviator in 1977. He has a Masters of Military Studies with Honors in Defense Management (Program and Acquisition Management) from American Military University.